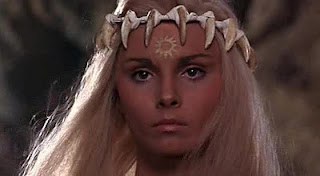 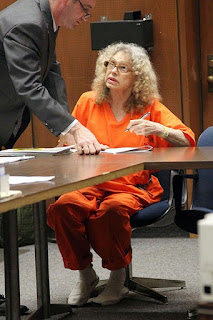 In 1983, I interviewed actress/playboy model Victoria Vetri for Bill George's book Eroticism In The Fantasy Cinema. It was the second interview I had ever done up to that point;my first was with up and coming actress P.J Soles whose film credits included HALLOWEEN, STRIPES and PRIVATE BENJAMIN. The big deal for me was that I was speaking to an actual Playmate; the dream of every red blooded  American male who ever perused an issue of Playboy.

Tory, as she preferred to be called because she didn't like the name Vicki, was charming ,engaging and generous with her time. My tape recorder had malfunctioned and she very kindly agreed to do the interview over again the next evening. During our second interview, Tory asked if she could change her answer to a question I had asked concerning Roman Polanski, who directed her in Rosemary's Baby. Her original answer was," I'm just glad he's out of the country.", in reference to the statutory rape case during which he fled the country to avoid a lengthy jail sentence. She changed her comment to ," I think he is a very creative director."

I felt a sense of sadness as I read on the various news websites the details concerning Tory's trial for shooting her husband of twenty five years, Bruce Rathgeb, because she felt he had been cheating on her. Luckily he survived, but Tory was sentenced to nine years in jail for attempted murder. The story received cursory attention from the news media; after all, forty four years has elapsed since her appearance in Playboy magazine and Tory hasn't acted in films or on TV for almost the same amount of time.To the jaundiced public, it was a mildly interesting story concerning the downfall of a former Playboy Playmate; something to read about and then be forgotten in a day or two. Such is the attention span of John and Joan Q.Public.

Here is my interview with Victoria Vetri from 1983.

VV: ROSEMARY'S BABY was my first feature. I got it because Mia Farrow refused to test with the actors. She didn't want to be bothered doing that menial stuff, so Roman Polanski said,"By the way, how do you look in dark hair and can you look Italian?" I said," Well, I'am Italian." He said," I'd like you to play the part of Terry Fionoffrio, Angela." I said,"Okay" and I played the part under Angela Dorian,my fictitious name. On the set one day he said," Angela, we cannot use Anna Maria Alberghetti name. Can you think of an Italian name"? I said," How 'bout Victoria Vetri?" He said," That's fantastic! What an imagination!" I said," That's my real name." He said," My God, why are you using that name of a sunken ship, The Andria Dorio?" I think Victoria Vetri has more of a -ah,what the hell,it's Italian.

JV: Was Playboy Magazine responsible for you getting the part in ROSEMARY'S BABY?

VV: No. Playboy really had nothing to do with me being in the film one way or another. By the time Playboy came out, I had already done the part because they mention that in my credits. I had twenty six TV shows,all lead parts, under my belt,plus ROSEMARY'S BABY, plus movies for TV. But they somehow made it sound like they discovered me. Which upset me at the time.

JV: Do you think that "Playboy" in any way helped your career in a positive direction?

VV: I think at one point in my career,it hindered it. I could have been a serious actress and all of the sudden it was like I was a thing,I was a commodity, I was a Bunny, I was a Playmate, and I played nothing but hookers. The types of roles that I went up for were not serious parts. I mean, I'm not saying that you can't play a serious hooker. Look at what Jane Fonda did in KLUTE. It's changed a lot. I was one of the first actresses to do Playboy. Then Claudia Jennings did it after me. I was very close to her and felt great remorse when I lost her in a car accident. I had to entertain that night. I had to sing with a rock group and I couldn't go on stage when I found that out. We had to give people their money back. Claudia and I did a film together called GROUP MARRIAGE. She was a superb actress who was coming into her own and she was a loyal friend. A very creative lady. And I think she was one of the best friends I ever had. The only person I got close to through Playboy and it was a big loss.

JV: From what you told before this interview, I guess you're one of the few people actually born and raised in California?

VV: Very few. I mean, when I used to bar tend between acting jobs I say," I'll give a free drink to any native Californian who can prove they're a native." And I was the only one in the bar.

JV: How did you get the part in WHEN DINOSAURS RULED THE EARTH?

VV: HAMMER(HAMMER FILMS, the English studio that produced a number of horror classics from the 1950's through the 1970's) located me through my agent. They had just done a film with Rachel Welch called ONE MILLION YEARS B.C. They'd seen me in some film,some magazine,it wasn't Playboy, and they said ," Let's do a test on her." I was obligated to Warner Brothers at the time and Francis Ford Coppola did a test of me running through the backs of the lot with a tiger bikini on panting and grunting,flaring my nostrils. Then we did another thing with me singing in front of a sky background with my guitar. They sent the test to London and Aida Young,the executive producer said," Send her over." It was shot in the Canary Islands and at Shepperton Studios. It was about six months work. It took a year and a half for the film to come out. By the time I got to the Bahamas to see the film they couldn't show it, because the color matching was all wrong. So it took two years for the film to come out. It won an award for best special effects.

JV: Did you find it hard reacting to imaginary dinosaurs?

VV: Yes, but I got used to it. I have a great imagination. After a while, they gave me a focal point. They'd say," Look up here" at this guy on a ladder and I would pretend like I saw this imaginary thing. I could see some rushes where they were putting in animation.

JV: In a book titled " HAMMER HOUSE OF HORROR," there are stills from WHEN DINOSAURS RULED THE EARTH which show you in the nude. Where these stills from scenes that were deleted from the version shown here domestically?

VV: No. These were publicity shots. Because once Playboy found out they were in the Canary Islands doing a film and I was scantily clad, they sent a photographer over there. They said," We'll pay you x amount of dollars to do stills because this would be good for our article Sex in the Cinema I said," Ok." Two weeks after we were there ,the director(Val Guest) left his wife. He was sleeping with the script supervisor. It was like you could have made a movie within a movie. Everybody was screwing around. People were skinny dipping, drinking sangria instead of tea at four in the afternoon, getting drunk on their asses and it was like party time. Three or four in the morning they'd say," You have to be up at six for a sunrise shoot? Let's stay up all night!" The sad part was when we came back to England and there the wives are, they've gotten letters from their husbands that have fallen in love on location saying," It's over. It was getting old anyway." Here's the wife pouting and holding the child in hand as he gets off the airplane. The director, Val Guest, comes off the plane arm in arm with the script supervisor who he fell in love with and ended up marrying, by the way. So it was like a little mini soap opera. Because you throw these people together and the English are wild and crazy once you get them in a loose environment. But to watch them drop their facade of properness and say," Ah, I'm free." Of course, having a California girl around didn't help because I was the first one to drop a loincloth. And all the girls between shots were getting a tan. After a while it didn't faze anybody. When you're all sitting around half naked it doesn't matter That was quote "a family". I'm still getting letters from a lot of people I worked with on that movie. When the film came to an end they were crying," Oh, I don't want you to go back to America. Stay in touch." That's the closest I've ever come to a family situation working with a film company.


Part 2 of my interview with Victoria Vetri coming soon.
Posted by joe vannicola at 10:39 PM